she naps and make sure that Bob never sleeps for more than 30 minutes? Who's going to curl up next to us and snuggle, but complain if we rest our arms on him?

Our darling Leopold will spend his time under the walnut trees, keeping us safe from The Grey Menace (pesky squirrels, always encroaching). We buried our friend and then we got the pack rooing. It's so hard, though. You always used to start the rooing, Leo. It just isn't right without your voice. While we were saying goodbye to you under your tree, it rained - suitable for a dapper gent, always in his tuxedo, a touch of rain pattered on the funeral cortege like something out of a Victorian romance novel. Then, after the shower passed, a rainbow blessed us with its beauty. We know it was you sending us a benediction from the Rainbow Bridge.

Goodbye, Lu-Lu. We miss you so much. And we thank you for the many blessings you brought into our lives.

Every minute she was out and about was a pleasure to Lily. She attended almost every local Meet & Greet, whether it was an event that lasted a few hours or a marathon seven days long. Her favorite "trick" was to roll on her back, begging for a belly rub from an unsuspecting passerby. After a few rubs the person would stand to leave and Lily would begin wiggling around to coax them to continue. She was always successful, and the belly rubs would continue for much longer than the person originally intended.

Lily was generally in good health until New Years Day of this year, when she had a stroke which paralyzed both front and rear limbs on her left side. She spent the weekend at the vet's, and I was told on that Monday that I might want to see her because things were not looking optimistic for her recovery. When I visited with her she couldn't stand but was very happy to see me. I knew it would be an uphill battle but I told the vet I wanted to take her home to see if she could recover. Because she couldn't stand or walk I carried her for about a week, from room to room and outside. Within a week she was rising and standing on her own, and shortly after began to walk well again without support. She showed so much strength and determination I knew that I could never again say the words "I can't." Several weeks into her recovery from the stroke she began refusing food, and I noticed a limp when she went for a short walk. I returned to the vet with her and through testing she was diagnosed with acute pancreatitis. She continued to refuse food so on February 5th she was admitted to the hospital for 48 hours of IV fluids. Since she continued to decline an ultrasound was performed. The pathology report showed cancer in her spleen, pancreas and liver. In addition an x-ray of the weak limb showed bone cancer. Although she was strong-willed enough to bounce back from the stroke, I knew she couldn't conquer this. When I visited her on February 8th she responded very little to my presence and I could see in her eyes that it was time to let her go.

Lily was the most fearless dog I've ever known, but inside she was a gentle old soul. I miss her presence at every turn. I'm sure my girl is getting her belly rubs from the angels and playing with the friends who welcomed her, and I know in her spare time she is staring at a spot beyond the Bridge where she is waiting impatiently for me to appear.

Lily arrived in my care at age 7, after bouncing from a home where she had lived for more than four years. Because she had been neglected prior to being returned she came to me with malnutrition, a phobia of being in enclosed places, and almost no housebreaking. She was truly a challenge, but her loving nature was reason enough to hope she could adjust. With good care and a lot of love and patience she began to thrive.

Lily was a prime example of the statement "You're never too old to try something new." At age 9 she became certified as a therapy dog and visited schools and nursing homes. At age 10 she entered obedience classes and advanced to working off-lead (in an enclosed area) with voice and hand signals, and at age 11 began jumping low hurdles in class.

to scritchin', or so help me I'll..."), commandeering the furniture, terrorizing the Rottweiler who lives next door, and thoroughly ruling her domain. She was nothing if not a fighter!

A week into December, she began to show signs things were not normal. X-rays revealed another tumor, this time in her chest, pushing against her trachea. Despite the valiant efforts of Dr Tom House and the wonderful staff at Island Animal Clinic here on St Croix (who called her "The Diva", for reasons obvious to anyone who ever met her), her breathing became too labored, and she crossed the Rainbow Bridge on 12/30/13, surrounded by those who loved her. She was three months shy of 12 years old.

The attached photo is her a week before her death doing what she did best - get right in your face and be a goofball.

She is survived by her Monkeys, Kass and Bob McGann-Davis, and her First State pack-mates, Preston (the Wonder Hound), Fred (Eufala Me), and Flash (Mighty Oak).

We have a huge aching void in our hearts which will never be filled. Melody was one of a kind, and we mourn her loss. 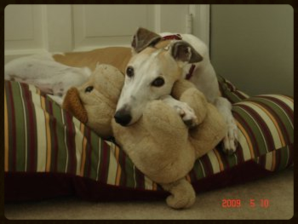 
Lady Di was such a special girl with a wonderful personality. It was a pleasure to have her for our pet. She brightened up the room and always made us smile. We miss her very much. 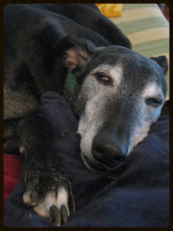 Leopold - aka Kiowa Betternmost - came to us on 31 July 2007, underfed and wormy, with the corner missing from one ear, and was only supposed to be with us for a few weeks. But when he woke up from a little nap and whined for a second, then picked up his head and looked at Kass, perked up, got up, and trotted over to her to get some ear scritches, we knew he couldn't leave. He'd wake up disoriented, look around until he saw one of us, then relax ("Oh, good. You're still here.") and go back to sleep.

We just don't know how we're going to know when to get up in the morning, go downstairs, feed the dogs, take them out, or go to bed without our loudmouth boy ordering us around. And who's going to bark at the UPS man after he's gotten into his truck to drive away? Who's going to howl and jump at the door like he has murder in his heart when actually he's the biggest candy-ass around? Who's going to accompany Kass when 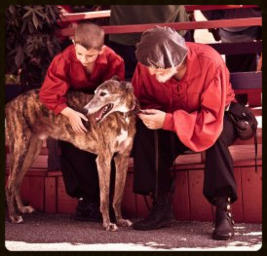 On 23 September 2010, Davey, one of the PA Renaissance Fair's royal hounds and my "best bud" died at about 130 AM in his sleep. Davey was a joy for Mary, my entire family and me. We had some greyt times with him.

He was a good ambassador for the breed, a good teacher of greyhounds new to the "pet" realm, an absolute gem with children, but, most of all, he was absolutely a hard core "Renny," who had to go there, walk around there, meet ALL of his many friends, actors, merchants, and even Faire patrons, all of whom loved to see him. Like most Greyhounds, he never refused a hug, treat, or ice cubes offered while on his morning stroll through the shire, which he demanded of us every Sunday morning. 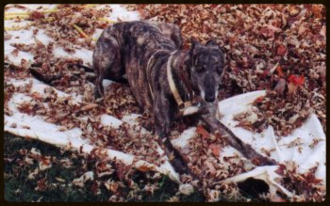 It has been a year and a half since we lost you to cancer. We still think about you and remember all the happiness and fun we had together. Our time together was short but sweet. Rescueing you was one of the best things we did. We gave you all of our love and more kisses on the head than any other greyhound. You will be in our hearts forever. 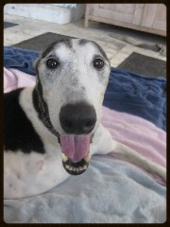 ICU Melody came to us in November 2005, immediately establishing herself as the Empress of our slice of the Universe. We often called her "Mei-mei", Mandarin for "little sister", as she came to live with us at the same time as Sebastian (Blade), who was five years her senior. She helped us through fat times and lean, happy and sad, and completely owned the soprano line in our pack's roo-fests.

She traveled with us to the US Virgin Islands in September of 2012, where her arthritis would never have to suffer the cold of another Pennsylvania winter. In the spring of 2013, she developed a tumor - the dreaded osteosarcoma. Within weeks after the amputation of the affected leg, Mei-mei was right back to her old self, bossing around the rest of her pack ("You there! Other greyhounds! Get out of my way! And you, Monkey! Get 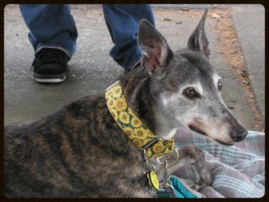