Rosie was in good health until late March, when she started to favor her left rear leg. Initial x-rays revealed nothing, and several trips to the vet resulted in a diagnosis of a strained muscle in the hip area or possibly a slipped disc in the back. Pain medicines brought no relief for her. A month later, on her last day with me, she came to me and stood looking into my face, as if to ask for a pardon from the pain. I made a vet appointment for that morning and insisted on new x-rays, which revealed extensive osteosarcoma in the pelvic area and a fractured pelvis. There was no treatment or remedy that would help her, and I could only imagine the pain she had been enduring. The only thing I could do was let her go and give her peace.

Rosie was a beautiful, elegant, sweet, loving greyhound. I couldn't have asked for a better companion and my heart hurts without her. I know she is at peace now, and I'm sure she was excited to be greeted by Lily at the Bridge, where the two will relax contentedly until it's time for us to be reunited. 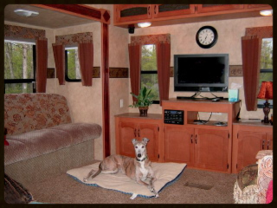 Trooper came to us last summer at age 7 after his people developed severe health problems. He had developed a seizure disorder, but this was well controlled with medications, and he was in good health until he developed a fast-growing, cancerous tumor of the neck in February.

Trooper was a sweet boy who was cuddly and affectionate.

He will be missed by all of us, including former foster families Joan Fish, and the Selmans, and most especially Matt & Jenn Rader, who fostered him since September, and their grey Monty. 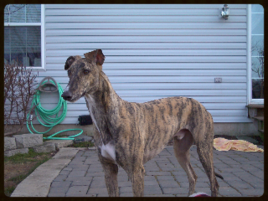 Miney Minee Jo known simply as "Jo" to us came into our lives in 2003 through First State. Jo was fostered by Jen & Bob Esterly and were very fond of him also. Over the last 8 years Jo became a integral member of our family and we loved him dearly. Jo was always one to steal a shoe or find the most comfortable spot in the house. We will miss his out of toon rooing, his sleepy bugs (we said he had them because he was so easy to sleep with), and how he stalked our other greyhound Frac. Jo would have been 10 in April 2011 and is survived by his 11 year old brother frac. Jo's passing was due to Osteosarcoma. Rest in peace my little Jo-Bunny. Love Mom and Dad. 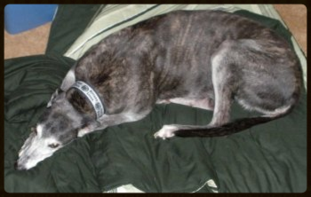 Gigi came into my home back in the winter of 2001/2002 after being rescued by FSGR from Ireland. Everyday when I would get home from work she would greet me by bouncing up and down, running in circles, and giving out what I called her wookie yell. She was such a sweet and innocent girl but very shy and timid. Only those that she trusted were lucky enough to see her true spirit. Through the good times and the roughest of times, she was always there for me so I tried to do the same for her.

In July of 2009, Gigi was diagnosed with osteosarcoma. For 15 months under the care of Dr. Couto and staff of the Ohio State Veterinary Hospital, she showed how big of a fighter she was. On October 31, 2010 it was time to say goodbye. A hemagiosarcoma was found a week earlier and took her away from me way too early. I miss her so terribly, but I would never trade the 9 years that she was with me for anything in this world. I look forward to seeing you again one day my baby girl.

I would like to thank FSGR for introducing me to such a sweet girl and such a magnificent breed.

Shortly after I adopted my first greyhound I casually mentioned that I was thinking about adopting a companion for him. Within a day I received an email from the First State adoption coordinator asking me if I would consider adopting a small, black female who needed a quiet home. I didn't really want a female dog, didn't want a black dog, and sure didn't want one with issues. Nevertheless, I agreed to take her, hoping for the best. Rosie turned out to be the dream greyhound. She had the most beautiful, sleek black coat, with the softest fur imaginable. She was quiet and undemanding, yet was playful and affectionate.

At times Rosie was a contradiction. While she was a confident alpha dog at home with the other hounds, so many things in the outside world made her tremble with fear. Loud noises, any sudden motion, and especially things with wheels, were her nemeses. Yet, as a certified therapy dog, when she visited the nursing home she was always the first of my hounds to approach someone in a wheelchair. Children also gravitated to Rosie, probably because she was so gentle and quiet.

Roxie came into my life when she was almost 5. I asked FSGR for a small brindle grey. When Susan brought her into my house I was taken aback at how beautiful she was.

We loved her unconditionally. Even when she couldn't help herself to resist food. After us, it was her most important passion.

She was a true counter surfer. The first week she joined us we learned that putting food towards the back of the counter was useless. Within her first 8 months with us she enjoyed lemon meringue pie, green peas, peanut butter, chocolate chip cookies and more.

Eventually her humans (us) learned how to keep food away from her.

She brought me comfort, love, and joy throughout the years and my children, Ari and Matt and I will forever be grateful.

Roxie, I hope you are enjoying more food than you can imagine. We love you. 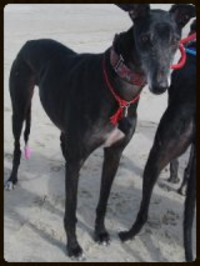 Thom was our first failed foster. While we had no intention of keeping him, Bill Weinberg knew all along...at the Faire he kept pointing out how Thom's eyes followed us. When he was "adopted" for a week, I cried & cried...until Susan Martin called to say that he was bouncing, and then brought him home to us.

Thom was our stoic boy. He never made a noise when he hurt, even when he broke his tail, although he grumbled enough if someone got in his space. We still find spots in our house from his episodes of happy tail. He never tired of trying to catch birds on the wire above our yard. Nothing ever kept Thom from his food, up until his last meal of canned sardines. Even without most of his teeth, he managed to chatter what he had left when he was pleased and relaxed, which was often.

The house is very quiet without the chattering of teeth, and choir practice will be missing his voice. 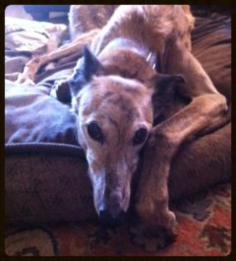 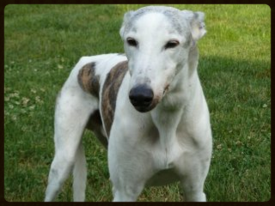 Prophet brought so much joy to my life. I was blessed everyday we had together. I will love and miss my handsome boy forever.

M's Calliope, aka, Tina entered into rest on Valentine's Day (2011) at home surrounded by her family. M's Calliope raced in Massachusettes until she was three. She was adopted in Massechusettes and renamed "Tina". She soon was returned to the adoption group and made her way to PA, where she was adopted into her permanent home. She was affectionately nicknamed "Weenie" as she was adopted on Halloween. Tina enjoyed helping out FSGR by working at the PA Ren Faire, taking walks thru Manor Community Park, camping and eating. She was 14.

Thank you for being Tina's friend,
~ Sean & Robin 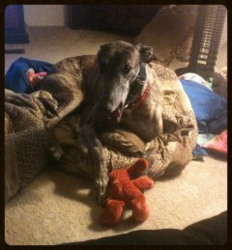