I wanted to let First State now about the passing of our 11 (almost 12) year old greyhound. We adopted Baby Doll from First State in June 2004 and had 7 and 1/2 wonderful years with her. She suffered a neurological or vestibular episode the Saturday after Thanksgiving and after 24 hours of emergency treatment, her condition (loss of right side function) did not improve and we humanely let her pass. We miss her terribly and the house doesn't feel the same without her. She was a great companion, following me everywhere, including waiting outside the bathroom door like a toddler. Luckily I can see her picture everytime I get on First State's website since her photo is on the home page -  the dark brindle in front of the beach fence at Rehoboth.

Thanks again for matching our family with BabyDoll! 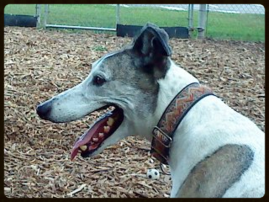 He was the most gentle soul I have ever known. We shared his life for 8 1/2 years and our house is not the same without him. I miss him bounding to the door to say hello when we came in and sharing the sofa while watching a movie. He was loved deeply and is missed beyond measure. 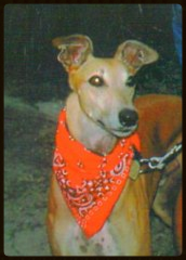 How does one go on without your closest friend? One day at a time, I guess. I lost my heart-boy Buddy on July 12, 2011, he was a few months over 14 yrs old. I knew he would continue to struggle to live, as all he lived for was to be with me. Buddy was my first grey, he saw me thru the loss of both my parents and the loss of my marriage after 32 yrs. But he also came to live with me here at Terry's farm, which was his favorite place in the whole world. It is peaceful, quiet and calm here. We all enjoy living here and hope to be with Terry til the end of our days here on earth. Buddy will be here forever, buried where he loved to be……he will always live on in my heart & soul.I miss him daily, as do his sisters and little brother!!! Farewell Bud, til we meet again!!!! 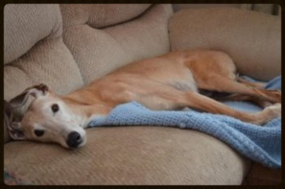 Frac came to us 11 years ago through first state by way of a Christmas Tree trade a First State Member made with a rescue group in Kansas. He was traded for 6 Christmas trees and brought to the east coast via riding in the cab of a tractor trailer. He came into our lives after a meet and greet at pet smart. He was large hound with a broken tail, over bite and the cutest fortune cookie ears. He adapted quickly to life after the track and began enjoying his new forever home. For the next 11 years he provided our family with unimaginable happiness. His recent passing will leave a void in our hearts forever. Run free my puppy, we will meet again.

Shelby came to us from Ireland via First State Greyhound nearly 10 years ago. With the exception of her "rather British" smile, she was a beautiful girl. She was always sweet and gentle. There were two things she could not get enough of - food and lovin'. Her favorite food was pizza crust; she would drool at the smell of it. If you stopped petting her, she would nuzzle you to begin again, and again, and again. She never understood dog toys, but she loved to "steal" gloves and wallets (all of which were eventually returned to their former owners in their original condition – more or less). In her younger days, she would get the "zoomies" and in a show of speed – gleefully sprint circles around the yard. She always thought herself to be smaller than she actually was; she would squeeze herself onto chairs that were too small for her, leaving one end or the other, hanging off the edge. When she was healthy, she would meet us at the door with a wagging tail and a happy "Roo".

She leaves us with aching hearts, but we are thankful for the experience of having had her in our lives. 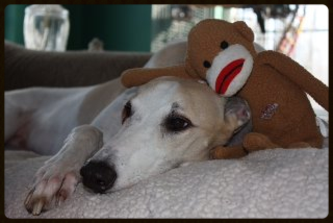 We adopted Player from First State in July of 2009. From the first day he arrived at our house he brightened our lives. At first he was very shy quiet but as a few weeks went by we quickly found out why he was named Player. He loved playing with everything from our other greyhound to his sock monkey and yes even our cat. When he played it didn't matter with who or what it sounded like a herd of elephants were passing through the house. Although he loved to play he liked nothing better than to lie on the couch and sleep and look over his kingdom for in his mind he truly was the king of our household. He liked his space but always enjoyed a good hug and an ear scratch.

In April of 2013 he was diagnosed with cancer and the specialist we took him to told us he had 2 to 3 months of life left. It was at that time that we found out that Player was also a fighter. He fought for and enjoyed life for 10 more months. On February 14, 2015, he gave up his fight at the young age of 7 however it comforts us to know that he is once again running, playing and taking long naps at that rainbow bridge until once again we are brought back together. Player you are missed but you will never be forgotten. Thank you Player and First State for making our lives better than what they were before you came into them. 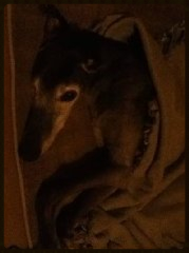 We adopted Dash from First State Greyhounds on Apr. 20, 2007 after being fostered by Janet Selman and Family. He was direct from the track after running 126 races. His house training was comical to say the least. If Janet and her family remember Dash's (then Midnight) home visit this will explain his experience with home life. We had a small preformed pond in our back yard, which at the time I did not think was an issue, until we let Dash out and he proceed to fall into the pond. He obviously had never been near a large, or small body of water before. Our front storm door was also a learning lesson for Dash. He learned very quickly from the pond and storm door incidents, but STAIRS, he could not quite concur his fear.

He passed the "Cat test" (aka Nala), which was necessary since we had a cat. In addition, Dash passed the "other dog test" (aka Laser), "guinea pig test" (aka Stella/Penny) and just recently the "bunny test" (aka Lily). Not a mean bone in his body!!!!!! He loved all his furry friends. 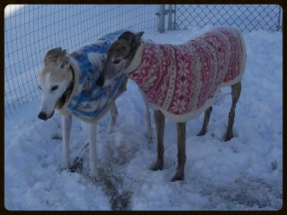 JayCee was our very first foster greyhound. Obviously we failed fostering 101. He passed on October 26,2011. He has brought a lot of joy to our lives and he was a greyt companion. He loved to go for long walks at the campground we belong to. That was his favorite place on Earth! He loved all the attention he got from the kids there. I have since returned to fostering in memory of JayCee, but I don't think I will ever find one quite like him ever again. He is missed greatly by us and his companion "Partner", in the pink coat. We will see you in Heaven some day buddy

So with that said..... To the most gentle giant I ever met. You were always there to lend and ear when I needed to talk. You were always there when I needed someone to lean on. You were there for each and every member of our family. You never fussed and never cried. You were strong and loving. Even though you had a hard life on the track you never let it show. I want to thank you for being a part of our family and most importantly for letting me know that it was time and that you were ready. I know that you are now running free and happy!!!! We will all miss you!

Our son texted the picture above to my husband (Dave) the night before we relieved Dash from his pain. He never moved from that spot the whole night. He waited for us to come down the next morning. Nathan and Lydia each said their goodbye's and then Dave and I stayed with him until Dr. Cindi Worrall, from "Lap of Love" came to our home. Dash lay comfortably in his favorite bed with his favorite blanket and his "little brother" Laser by his side. Dave and I said our goodbyes and he went peacefully to the "Rainbow Bridge".

I would also like to thank First State Greyhounds for doing what they do so well, and that is finding retired greyhounds their "Forever Homes"!!! 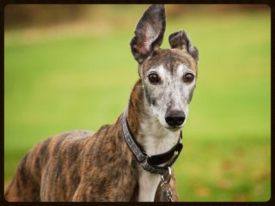 Our Lilli passed on July 6, 2012 at the age of 13 1/2. She was the sweetest girl anyone can imagine and taught us all how to age with dignity. She was in a lot pain at the end but was always stoic and greeted us every morning with a smile even as she struggled to move -yet if she could get her speed up and run - she would again appear young for however brief her race around the property. Our vet came to our home on that July day and we sat in our little grove while Lilli calmly laid down in her favorite shady place as she seemed ready to go to a place without pain. She lives on in our hearts forever and we have a memorial garden for her now with a river stone which reads, "Lilli, The Fastest Girl in Town" :) 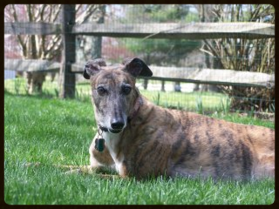